Research cooperation between Bhutan and Sweden

Nestled in the lush and vast Himalayan mountains, the people of Bhutan are often described by their happiness, economic freedom, and simple ways of life. There is often a sense of pride and contentment with life in land of the thunder dragon. Although still one of the least developed countries, the people of Bhutan have also been going through relatively rapid changes. Roads are being built, more and more people are moving to the capital, television and internet are reaching people all over the country, and education and work life is changing. While much of this change is good, there are still many aspects to this rapid change that are not well understood.

This late winter, Joshua Juvrud and Kim Astor, researchers at the Child and Baby Lab from the psychology department, in collaboration with the Khesar Gyalpo University of Medical Sciences of Bhutan in Thimphu, went to Thimphu to begin studying how this changing life in Bhutan is affecting families and young infants. Bhutan provides a unique opportunity to reach families from all kinds of social and economic backgrounds, far more variability than what we can find in Uppsala. But at the same time, families in Bhutan have the resources and a way of living that means they do not suffer from conditions often found in other developing countries, such as war and conflict.

When Joshua arrived, it was a cold time in the capital city. The Bhutanese were all wearing their winter Ghos (double thick!) and the mountain tops that surround the city were capped in snow. Joshua spent nearly five weeks working at the hospital with families that would come in for their child’s regular vaccinations. When they arrived, they were asked if they would like to participate with their child in several tasks that examined cognitive development and family life. Joshua also assisted in teaching psychology courses for the students at the university who were learning to become psychologists – the countries first psychologist program. When not working, Joshua spent the afternoons learning the traditional art of archery. Trained by Sithar Tshering, who runs a small archery shop in the center of the Thimphu archery range, Joshua spent several days a week learning how to shoot a target at 145 meters. At the end of his stay, he was invited to join a team for a competition, even earning points and making his teacher proud. Participating in such a rich cultural tradition was an experience unlike any other. Sithar works hard to keep this traditional art form alive and thriving in the country.

During a weekend, Josh traveled to the city of Punakha to attend a 3-day festival at the impressively beautiful Dzong. The grounds were filled with thousands of people all there to enjoy the lively music, extravagant and colorful costumes, intricately detailed masks, and choreographed dances. Truly, a unique and exciting experience, set in the landscapes of a beautiful city. The drive to Punakha was especially majestic, winding through the snow-covered mountains with some brief stops at wood-fire heated teahouses.

When it was time for Joshua to leave, Kim arrived to continue the work. At this time it was still cold and there were days when a sparkling snow covered the whole valley of Thimphu. The intensity of testing increased as the team slowly learned how to better reach out and recruit families. This was beneficial to all parts, as families who would have otherwise missed the vaccination now got reminded to get the valuable shot for their child. Overall, the families were happy about participating in our study and appreciated that we wanted to contribute to the people of Bhutan, an important aspect of the project.

As work went on a tradition started at the clinic. Each day around noon Kim and the staff had a snack in the test room or out in the garden if the weather allowed, usually consisting of Momos (similar to dumplings) with a lot of chili! After work Kim took a walk down to the market of Thimphu to buy fresh organic vegetables and impressed the team of Bhutanese colleagues by learning how to cook and love the national dish Ema Datshi (Chili and Cheese). There is nothing better than this hot simple dish together with a Druk 11000, the local beer.

As days went on the spring was knocking on the door and beautiful blossoming cherry trees made Thimphu come to life. Late during Kim´s stay he had the opportunity to visit the countryside. As soon as you go outside of the capital one aspect of Bhutanese culture becomes striking, their fascination for phalluses. You can see them everywhere, often painted on houses. During the excursion Kim and his friend Tashi also visit the temple of fertility. For a Swede it is a little puzzling when an apprentice monk, at around 11 years of age, is insisting on blessing the phallus statue that you just bought. Though Kim got the impression from Tashi that even the locals could feel a little self-conscious about this cultural peculiarity as he did not want to buy his phallus necklaces from a woman, and further told Kim that his wife would have to hand them to his daughters, for which he bought them as a gift. Aside from the phallus statue, Kim also brought a souvenir that he could not bring back to Sweden, a Kangling. A Kangling is a beautiful flute and a holy instrument, but for the time of purchase Kim did not know of its origin, that it was made out of human bone. Luckily a local store owner would accept it in trade for traditional animal masks for Kim to bring to his son.

Arriving in Bhutan is an excitement as the aircraft is cruising between mountain tops and make a couple of sharp turns just before landing. Though however scary that might be, going by car from Paro to Thimphu on the roads just meters away from steep cliffs and no railing is even scarier. However, even though it is hard to imagine for someone with a mild respect for heights, when it was time for Kim to leave, going the same way back to Paro felt as natural as anything. Sitting in the car without seatbelts just a meter from a 100 meter drop, he could not do anything but smile. 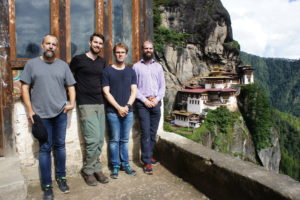