Honorary consul of Bhutan to Sweden, Phub Zam, received The Order of the Polar Star from the King and Queen of Sweden on December 3, 2019. The King Carl XVI Gustaf and Queen Silvia of Sweden who are on a six-day visit to India, awarded the medal to Phub Zam in recognition of her services in strengthening the relationship between Bhutan and Sweden.

Phub Zam said that although diplomatic relations between the two countries dates back to a few decades, efforts to strengthen the relation-ship in the fields of business and people-to-people connection has recently picked up.

In her last four years as the honorary consul, she said that her main responsibility has been to facilitate Bhutanese and Swedish people visiting the either countries. All the necessary formalities, she said are carried out by the consulate office. “We are also exploring markets in Sweden for our Bhutanese products. While most of these works are in their initial phase, we see and positive prospect in the near future.”

The Royal Order of the Polar Star is a Swedish order of chivalry that was founded by King Frederick I of Sweden on in 1748 and it is awarded only to foreigners and members of the royal family for their service to the country of Sweden. 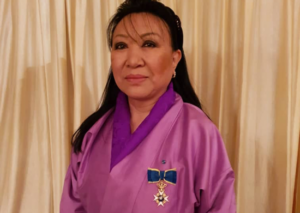