The association’s annual meeting was held May 15, 2018. After the annual meeting, Axel Odelberg talked about his journey from west to east in Bhutan under the heading ”Biker in Bhutan – On motorcycle through Bhutan in the Spring of 2017″.

Axel Odelberg is a Swedish author and journalist. During the last few decades he has written four well-known books in addition to articles in journals; the first one about Frans August Larson, a Swedish missionary and jack-of-all-trades in China, known as ”Count Larsson”, then three books about Sven Hedin in which he follows Hedin’s life as explorer and question his involvement in the political games of the First and Second World Wars. In connection with this he has traveled and researched widely around Central Asia and Tibet, and now also in Bhutan. 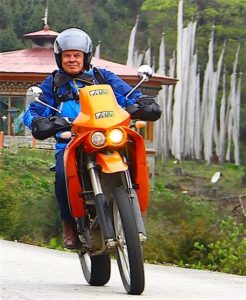